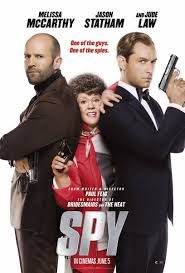 As 2015 will definitely be the Spy movie year with the release of the blockbusters Mission Impossible Rogue Nation and the New James Bond movie Spectre, it would be unfair to not have a spoof to celebrate the genre. So here is Spy, a comedy about spies, really weird and clumsy ones with Melissa McCarthy taking the leading role. Knowing the comic potential of Miss McCarthy, I expected to have a great moment and I did. But leave your brain home. This is all about laugh and fun. There is no plot just gags. Melissa stars as Cooper, a CIA analyst secretly in love with the field agent she works with and is desperately trying to convince her boss that she can work in the field. When her beloved agent is killed during a mission and the identity of the remaining field agents is disclosed, Cooper is sent for the first time in the field to infiltrate and neutralize an arms dealing organization as well as to recover a nuclear nuke before it fells within terrorist hands. It is fun seeing Melissa McCarthy playing the newbie spy with funny outfits and gadgets. But the others cast members are also having a lot of fun playing their roles. The most surprising one is Jason Statham who is more familiar with action movie than a spoof. He was probably making fun of himself and it's working. Miranda Hart is also very funny as Melissa McCarthy best friend who is as clumsy as her. Jude Law is very sexy as a James Bondesque spy even if we don't see him much. Beware though, the language used is really crude and probably a lot of people would not like it. But it is the new comedy standard: we love more and more hearing rude lines in comedies, Just ask Seth McFarlane. But you will still have a great moment watching this movie. It would have been better if it would be shorter, 130 minutes is quite long for a comedy. I give it a 8 out of 10 for the great laughter and smile this movie brought me.