After the release of his debut solo album Justified in 2002, Timberlake thought he 'lost his voice' in the sense that he did not like what he was doing.[2] He felt 'burnt-out' after Justified; this partly changed his career's direction, and he took a break from the music industry and instead appeared in films.[2] The first role he took during this time was as a journalist in the thriller Edison Force, filmed in 2004 and released on July 18, 2006.[3] He also appeared in the films Alpha Dog, Black Snake Moan, Richard Kelly's Southland Tales, and voiced Prince Artie Pendragon in the animated film Shrek the Third, released on May 18, 2007.[4] 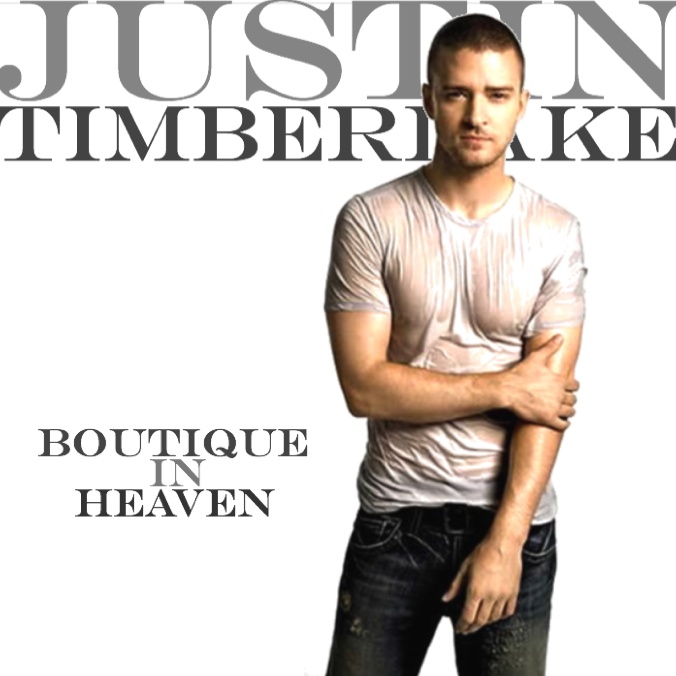 When he felt inspired to compose songs again, he did not choose to reunite with his former band 'NSYNC, although he considered it after his first record.[5] Instead, he went to Justified collaborator Timothy 'Timbaland' Mosley's studio in Virginia Beach, Virginia to begin sessions for his second album.[2][6] However, neither of them had an idea of what the album would be–no plan for it and even a title.[6] 'FutureSex/LoveSound' was written and produced by Timbaland, Nate 'Danja' Hills and Timberlake himself.[7] The song was recorded by Jimmy Douglas, while its mixing was done by Douglas with Timbaland at The Hit Factory Criteria in Miami. The keys were played by Danja, who also provided the drums with Timbaland.[7] Paul Blake played the guitar and Timberlake sang the background vocals.[7]

'FutureSex/LoveSound' incorporates elements of new wave and industrial rock into its production.[8] It was written in the key of F#minor, in common time, with a tempo of 104 beats per minute.[9] Timberlake's vocal range spans from the low note of A3 to the high note of G#5.[9] Timberlake sings in a 'muted whisper slink' and his distorted voice 'drones' over a 'very produced' beat.[10][11] Bernard Zuel of The Sydney Morning Herald stated that Timberlake morphs into 'Michael Hutchence at his most lizard-like'.[12] According to Spence D. of IGN, the beat is a 'throwback from the future past of disco's demented dimension'.[11]

The song contains a 'rolling' synth bassline and 'truncated' percussion, that according to Zuel, comes across as both 'alluring and ever-so-slightly sinister'.[12] It contains 'slow breaks', that according to Jamil Ahmad of musicOMH, 'wrap this record round you like walking into an exclusive club with a million dollar sound system – you know you are going to have one of those nights'.[13] The pace of the song changes with its chorus, which Mikey MiGo cited as being 'a bit off setting'.[10]

'FutureSex/LoveSound' is 'brimming over with attitude, sharp beats and rhythm', according to Linda McGee of RTÉ.ie.[14] The song, which was described as being 'suavely portentous' by Pitchfork Media's Tim Finney, was cited as being a mixture between 'the carnal strut' of Nine Inch Nails' 'Closer' and the 'masochistic flutter' of the Junior Boys.[15] Finney said the song 'derives its charm' from its 'lofty' aspirations, 'like a familiar lover staging an elaborately exaggerated seduction'.[15] According to Alexis Petridis of The Guardian, 'FutureSex/LoveSound' and the other opening songs of the album are heavily influenced by David Bowie's Diamond Dogs (1974).[16] The song sounds 'horny' which can be seen through the lines 'Slide a little bit closer to me, little girl / Daddy’s on a mission to please.'[17] The chorus of the song reminded 411mania's Mikey MiGo of Prince's 'New Power Generation'.[10]

Mikey MiGo of 411mania wrote that the song is a 'welcomed change' from Timberlake's past work. She stated that the song 'has qualities of Prince that I've never seen anyone muster up before'.[10] Amanda Murray of Sputnikmusic called the song 'musically and melodically great', but criticized its lyrics.[18] She wrote that the lyrics sound like the dialogue of a 'low-rent porn film', highlighting the lines: 'She's pressed up on me; I think she's ready to blow?' and 'All I need is a moment alone, to give you my tongue and get you out of control'.[18] According to Murray, 'It makes one question exactly what films Timberlake was starring in during his sabbatical.'[18] She concluded that 'FutureSex/LoveSound' establishes a pattern for the rest of FutureSex/LoveSounds: 'infectiously catchy and in many cases accomplished pop music, marred by retardedly retarded lyrics'.[18]

In a review of FutureSex/LoveSounds, Ben Williams of New York cited the album's first five tracks, including 'FutureSex/LoveSound', as updating the early 1980s Minneapolis sound: 'tense drum machines, high-pitched synth squiggles and staccato funk bass lines'.[19] While reviewing the album, Stephen Thomas Erlewine of Allmusic noted that the first three songs of the album include the word 'sex' in their titles, 'as if mere repetition of the word will magically conjure a sex vibe, when in truth it has the opposite effect: it makes it seem that Justin is singing about it because he's not getting it.'[20] Lucy Davies of BBC Music stated that it is initially 'difficult to listen to the lyrics of the opening tracks and give an objective opinion'. She wrote that it is like Timberlake is 'trying to find redeemable qualities about some guy who has zero social skills and stares at women on his own from the corner of a bar. Only he seems to have found some similarly unreconstructed creepy friends shouting words of encouragement to his clunky chat-up lines, like Timbaland'.[21]

Credits adapted from the liner notes of FutureSex/LoveSounds, Jive Records.[7]

Following the release of the album, 'FutureSex/LoveSound' did not enter the US BillboardHot 100, but peaked at number 13 on the Bubbling Under Hot 100 Singles chart.[26]

Give Justin Timberlake credit for this: he has ambition. He may not have good instincts and may bungle his execution, but he sure has ambition and has ever since he was the leading heartthrob in *NSYNC. He drove the teen pop quintet to the top of the charts, far exceeding their peers the Backstreet Boys, and when the group could achieve no more, he eased into a solo career that earned him great sales and a fair amount of praise, largely centered on how he reworked the dynamic sound of early Michael Jackson at a time when Jacko was so hapless he turned away songs that later became JT hits, as in the Neptunes-propelled 'Rock Your Body.' That song and 'Cry Me a River' turned his 2002 solo debut, Justified, into a blockbuster, which in turn meant that he started to be taken seriously -- not just by teens-turned-adult, but also by some rock critics and Hollywood, who gave him no less than three starring roles in the wake of Justified. Those films all fell victim to endless delays -- Alpha Dog aired at Sundance 2006 but didn't see release that year, nor did Black Snake Moan, which got pushed back until 2007, leaving Edison Force, a roundly panned Shattered Glass-styled thriller that sneaked out onto video, as the first Timberlake film to see the light of day -- but even if silver screen stardom proved elusive, Justin didn't seem phased at all, and his fall 2006 album FutureSex/LoveSounds proves why: he'd been pouring all his energy into his second album to ensure that he didn't have a sophomore slump.

If Michael Jackson was the touchstone for Justified, Prince provides the cornerstone of FutureSex/LoveSounds, at least to a certain extent -- Timbaland, Timberlake's chief collaborator here (a move that invites endless endlessly funny 'Timbaland/Timberlake' jokes), does indeed spend plenty of time on FutureSex refurbishing the electro-funk of Prince's early-'80s recordings, just like he did with Nelly Furtado's Loose, and Timberlake's obsession with sex does indeed recall Prince's carnivorous carnality of the early '80s. But execution is everything, particularly with Timberlake, and if the clumsy title of FutureSex/LoveSounds wasn't a big enough tip-off that something is amiss here -- the clear allusion to Speakerboxxx/The Love Below would seem like an homage if there weren't the nagging suspicion that Timberlake didn't realize that the OutKast album bore that title because it was two records in one -- a quick listen to the album's opening triptych proves that Justin doesn't quite bring the robotic retro-future funk he's designed to life. Hell, a quick look at the titles of those first three songs shows some cracks in the album's architecture, as they reveal how desperate and literal Timberlake's sex moves are. Each of the three opening songs has 'sex' sandwiched somewhere within its title, as if mere repetition of the word will magically conjure a sex vibe, when in truth it has the opposite effect: it makes it seem that Justin is singing about it because he's not getting it.

Surely, his innuendos are bluntly obvious, packing lots of swagger but no machismo or grace. They merely recycle familiar scenarios -- making out on the beach, dancing under hot lights, acting like a pimp -- in familiar fashions, marrying them to grinding, squealing synths that never sound sweaty or sexy; if they're anything, they're the sound of bad anonymous sex in a club, not an epic freaky night with a sex machine like, say, Prince. But Prince isn't the only idol Justin Timberlake wants to emulate here. Like any young man with a complex about his maturity, he wants to prove that he's an adult now by singing not just about sex but also serious stuff, too -- meaning, of course, that drugs are bad and can ruin lives. Like the Arctic Monkeys deploring the scummy men who pick up cheap hookers in Sheffield, Justin has read about the pipe and the damage done -- he may not have seen it, but he sure knows that it happens somewhere, and he's put together an absurd Stevie Wonder-esque slice of protest pop in 'Losing My Way,' where he writes in character of a man who had it all and threw it all away...or, to use Justin's words, 'Hi, my name is Bob/And I work at my job,' which only goes to show that Timberlake lacks a sense of grace no matter what he chooses to write about.

Graceless he may be, but Timberlake is nevertheless kind of fascinating on FutureSex/LoveSounds since his fuses a clear musical vision -- misguided, yes, but clear all the same -- with a hammyness that only a child entertainer turned omnipresent 21st century celebrity can be. Timberlake yearns to be taken seriously, to be a soulful loverman like Marvin Gaye coupled with the musical audaciousness of Prince, yet still sell more records than Michael Jackson -- and he not only yearns for that recognition, he feels entitled to it, so he's cut and pasted pieces from all their careers, cobbling together his own blueprint, following it in a fashion where every wrong move is simultaneously obvious and surprising. There is no subtlety to his music, nor is there much style -- he's charmless in his affectations, and there's nothing but affectations in his music. At least this accumulation of affectations does amount to a semblance of personality this time around -- he's still a slick cipher as a singer, yet he is undeniably an auteur of some sort, one who has created an album that's stilted and robotic, but one who doggedly carries it through to its logical conclusion, so the club jams and slow jams both feel equally distant and calculated. There is, however, a flair within the production, particularly in how foreign yet familiar its retro-future vibe sounds.