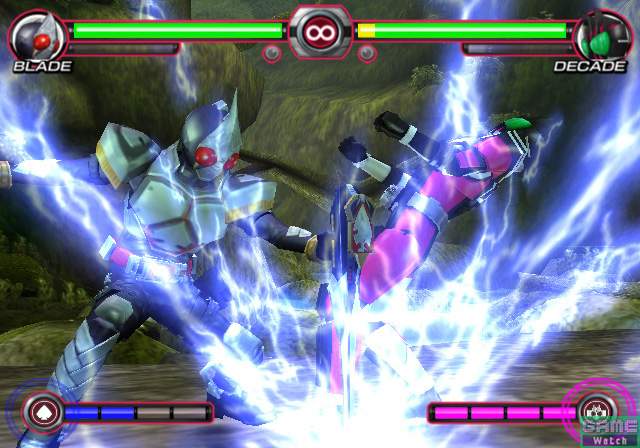 Kamen Rider Blade (Masked Rider ♠) is the 2004-2005 series of Kamen Rider and the fifth installment in the Heisei Era.

Ten thousand years ago, a massive battle royale took place between the immortal Undead monsters, each one representing a species of creature on Earth. The Human Undead was the victor, and as a result the human race was allowed to multiply and populate the Earth as its dominant species. Meanwhile, the losing Undead were sealed into cards to slumber for eternity.

Unfortunately, BOARD is swiftly destroyed by an Undead attack and Kenzaki finds that Tachibana has apparently betrayed the human race. A second opponent is found in Hajime Aikawa, an introverted photographer who hides a deadly secret: he is actually an Undead who can use the Sealed Category Ace of Hearts card to transform into Kamen Rider Chalice without the use of an external Rouzer device. The quartet of Riders is completed with Mutsuki Kamijo, who is chosen by the Sealed Category Ace of Clubs card to become Kamen Rider Leangle, only to have the evil Spider Undead sealed within slowly take over his mind and create a new, deadly enemy.

The show's slogan, 'Now your power is at its peak', is a reference to a comment made by one character in regards to titular character Kazuma Kenzaki: that he reaches his maximum potential as Blade when he is fighting to protect others.

Partnered with the Super Sentai show Tokusou Sentai Dekaranger after initially airing alongside the final episodes of Bakuryuu Sentai Abaranger in the Super Hero Time block.

This series contains examples of: