Plays: 14,577 M:98% F:2%
Filesize: 455,326kb
If you're getting a black screen with no audio, you'll have to uncheck 'Use hardware acceleration when available' in your Chrome settings. For more information on how to do that, go here:
//www.vizzed.com/boards/thread.php?id=94929

This is a complete English translation of Castlevania: Rondo of Blood (a.k.a. Akumajō Dracula X: Chi no Rondo). Everything is translated; even the voiced dialogue is replaced with the official Konami English dub from Castlevania: The Dracula X Chronicles (PSP). However miscellaneous grunts will retain their original Japanese.

Castlevania - Rondo of Blood (english translation) Review by: pollution_skunk - 10/10
HOT RICHTER-ON-MAIDEN ACTION!
If there is one videogame franchise that transitioned perfectly between different eras and hardware while successfully mixing things up considerably between each installment, it's Konami's classic Castlevania/Akumajou Dracula (Dracula's Demonic Castle) series.
Born in Nintendo's Famicom Disk System peripheral (a floppy disk/diskette drive for the japanese NES) in 1986 as a rather standard action-platformer with (in?)famously stiff gameplay, the original Akumajou Dracula was a surprise hit, receiving ports for the MSX2 OS (under the name of Vampire Killer), arcades (under the name of Haunted Castle) and finally a cartridge conversion (which was re-released much later in Japan with electable difficulty levels) for the western NES, whose success made the Castlevania name stick to the franchise like industrial glue, at least in non-asian territories.
Riding on the popularity of action-RPGs in mid-to-late 80's Japan and evolving the concepts first presented in the MSX2 Vampire Killer, Konami released the universally-despised Dracula: Noroi no Fuuin/Castlevania II: Simon's Quest for the Famicom Disk System in 1987 (it took one year to release the western version this time because of the game's bigger focus on dialogue and the need to downgrade the game's sound and save function so it could run on a standard NES), with the franchise coming back to it's roots (whoa, already?!) after the FDS died with 1989's Akumajou Densetsu (Legend Of The Demonic Castle)/Castlevania III: Dracula's Curse (which once again was released much earlier than the American version due to the japanese cart's use of Konami's awesome VRC6 mapper chip, which is sadly incompatible with western NESes due to Nintendo's imperialistic policies at the time. At least it received some slight upgrades and touch-ups in the transition, but the JP version is still worth playing for the fantastic soundtrack and awesome graphical effects alone).
In the 16-bit era, SEGA fanatics got the Bram Stoker's Dracula-inspired Vampire Killer/Castlevania Bloodlines/Castlevania: The New Generation while Nintendo lovers got Akumajou Dracula/Super Castlevania IV (which is actually a massively-expanded remake of the original FDS/NES Castlevania, as the japanese title implies), which neatly followed the series' traditions while adding some new stuff here and there, but everything changed when the 32-bit era came along, with Akumajou Dracula X: Nocturne Of The Moonlight/Castlevania: Symphony Of The Night's release.
Syphony Of The Night massively changed many elements and aspects of the series for the better, adding a level of complexity rarely seen before or after to the Belmont family's eternal struggle against Dracula and his dark forces. Actually, scratch that whole Belmont thing. SotN was the first Castlevania not to focus exclusively on the holders of the holy Vampire Killer whip, following the wacky adventures of Dracula's own half-vampire son Alucard in his mission to avenge his human mother's death under the hands of his blood-sucking dad after a millenia-long leep (he was last seen in Castlevania III at the time) while the young, spunky, energetic and familiar-wielding Maria Renard looks for her missing brother-in-law Richter Belmont, which defeated Drac while rescuing some maidens along the way in the series' previous game but mysteriously vanished after that. 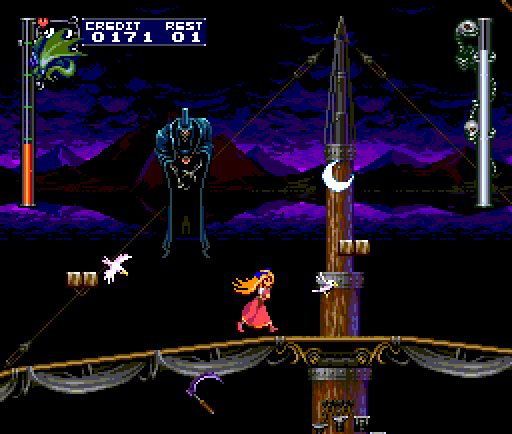 One of the Castlevania series' most defining characteristics is it's fantastic soundtrack that is remembered up to this day, with themes like Vampire Killer (the first game's Stage 1 tune) and Bloody Tears (Simon's Quest's 'Overworld - Day' music) being instantly recognizable for gamers old and new when played in any sound hardware. In fact, each Castlevania game of the 80's and 90's (other than the SNES Dracula X) used different sound hardware, at least in Japan - Castlevania had to contend with the NES' bog-standard 2A03 soundchip, Dracula: Noroi No Fuuin made full use of the FDS' extra wavetable channels (which the western NES lacks), Akumajou Densetsu has the best soundtrack in the whole Famicom library due to the game's use of the Konami VRC6 sound/graphics/mapper chip (westerners had to content with a single extra sound channel provided by Nintendo's MIC-5 chip, which doesn't compare to the awesomeness provided by the VRC6) and Super Castlevania IV used the SNES' high-quality PCM chip to pull off some fantastically dark tunes (something rather unique for the console, as the composer's only other known work is in Konami's excellent SNES-exclusive shmup Axelay), but Rondo Of Blood puts all of these to shame, being the first Castlevania to have a (mostly) CD-Audio soundtrack. Kuheika Club's (the Konami sound team/band responsible for old-school Castlevania's soundtracks) epic creations come to life like never before in this game, with amazing, adrenaline-pumping tracks built with some fantastic 90's synth. 'Bloodlines', Stage 1's theme, particularly stands out as an instantly recognizable Classicvania tune even for those who never played this game or any of it's variations as it is Richter's musical motif in Symphony Of The Night and many other Castlevanias.
Speaking of classic tunes, I have to congratulate Kuheika Club for their treatment of Vampire Killer, Bloody Tears and Beggining (the Stage 1 tune of Dracula's Curse) in the game's soundtrack. The Castlevania series has a habit of re-mixing songs from previous installments in each new game (the first game to do this was ?1988's Haunted Castle, with it's arrangement of Bloody Tears in Stage 3), and RoB embraces this tradition full force, having brand spankin' new versions of Vampire Killer, Bloody Tears and Beggining play in Stage 2, 3 and 4 of the standard route, in that order. Due to the CD format, though, these legendary songs now have a fresh new coat of EPIC. Vampire Killer's awesome 90's synth plays as you storm Castlevania's main halls in a stage reminiscent of where the Belmonts' adventures began (except for a GIANT BULL-DEMON OF DOOM), Bloody Tears is now pure hard-rock awesomeness that fits with the cursed chapel it plays on, but Beggining arguably shines the most here, being an oddly upbeat yet creepy dungeon theme, if that is even possible. And as a bonus, the original games' boss theme - titled Poison Mind, according to Konami - plays in a very special, very nostalgic

segment of Stage 6, re-arranged using the PCE's native wavetable soundchip. What's so special about it's?appearance? Well, play the game and find it out for yourself! ;)
OVERALL: 10/10
You can praise Super Castlevania IV all you want, but it's fact that Rondo Of Blood is a much superior game that truly shows how CD technology could be used for the good of videogaming.
The PC-Engine CD and it's expansions thankfully didn't suffer from a flood of terrible FMVs like the SEGA/MEGA-CD did, but the console's lack of popularity in the US made it get discontinued just around the time RoB got released. I wonder why NEC/Hudson didn't pack it with the Turbo-Duo (which is actually just a modified version of the japanese PC-Engine R/RX, itself a PC-Engine with a built-in CD add-on and SUPER-CD expansion card) as last-ditch effort and completely changed the videogame industry of the 90's in the proccess?

Users who own Castlevania - Rondo of Blood (english translation)